The Artist couple Gary and Kathwren Jenkins live in Sedona, Arizona, where they have their art studio and gallery. Gary and Kathwren made their names as artists and taught painting for many years. Their seminares are legendary.

In 1980, the opportunity came along for Gary to host his own national P.B.S. television painting program, “Jenkins Art Studio”. During the 1980s -1990s he also toured nationally to major conventions and art stores to teach painting seminars, and is still teaching many workshops a year. Gary has painted for many fine art galleries as well as owning his own studio and galleries.

Many of his paintings have been put into print and are in private collections. Gary was given the prestigious title as of one of “The Best Floral Painters in America”, presented and published by North Light Books. In The early 1980s Gary started producing his own “How To” video instruction tapes.  These were the first art instruction video’s to be sold in the United States and are still being sold today, through the Jenkins mail order business.

Gary has several Giclee prints on canvas. His favourite subjects to paint are florals. He is especially known for his trademark style of the Jenkins Roses and Poppies. Gary started to develop his style of floral painting in the early 1970s. His well known has been taught to thousands of students around the world. Gary also paints Exotic birds and tropical fish, which have many of the same vibrant colours of his florals.

As of 2007 Gary has once again started to host his own television series. His new shows will be televised internationally for the first time. Gary’s hope for the future is to continue with his long career of teaching people everywhere how to be creative oil painters.  A true artist never stops creating. Gary currently resides in Arizona U.S.A. with his artist wife, Kathwren.

Kathwren Jenkins was born in Toronto Canada, and raised in Southern California. Kathwren began oil painting at the age of 18. She also majored in art in high school and attended art courses in the evening at a junior college.

Kathwren continued to paint and learn on her own all through the 1960s. In the mid 1970s, she became an art teacher at a studio in Nevada where she was living at the time. In 1980 she met her husband Gary Jenkins. Kathwren then began to team teach with him, travelling nationally to about 30 states per year.

In 1990, Kathwren became a co-host along with her husband Gary, of the popular national P.B.S. television art show, “Jenkins Art Studio”, This continued until 1999.

Currently Kathwres originals paintings are shown in fine art galleries in Carmel, California. She also has several of her paintings in Giclee prints. Through out the years, Kathwren has continued to teach, and more recently became a co-host once again with her husband Gary on their international art show series “The Beauty of Oil Painting”. Kathwren wrote all the books that go along with the television series and is also co director of the shows. Kathwren will also continue to produce more “How To” art DVD’s. Painting florals and exotic birds is her passion. Kathwren hope for the future is to continue her long art career with her partner and husband Gary.

“I love to paint florals more than anything else. Florals can be painted in vibrant colours or soft pastels, depending upon the mood you wish to express. The shapes are interesting to me, especially when painting the very large flowers on oversized canvases.”

John F. Thamm lives in Spokane, Washington. He holds portrait-workshops in many areas of the USA and in Europe. John F. Thamm’s passions are portrait painting, landscapes and social realism.

Born in Wendell Idaho, John Thamm’s educational endeavors have led him from coast to coast and Europe. After graduating from the University of Idaho, Thamm continued his studies at the Art Student’s League in New York City with a Ford Foundation Scholarship where he studied portraiture with Samuel Oppenheim. He operated a gallery in New York’s West Village and continued his work in social realism with guidance by Jack Levine.

John was an oil painting instructor with the Community Colleges of Spokane when he became a good friend of one of his students-Bob Ross. John introduced Bob to William Alexander and several years later Bob launched his Joy of Painting series. Bob always admired John’s portrait teaching technique and asked him produce a video under the Bob Ross series. John began teaching portrait workshops featuring his “Wipe-out Technique” and has shared his expertise with hundreds of other artists in the United States, Europe and Mexico.

John’s interest in portraiture and sculpture led him to pursue the craft of leather mask making near Padua, Italy with Donato Sartori. He produced a series of leather-sculpted masks in the tradition of the Comede D’Arte. Then in1993, Thamm expanded his interest in portraiture by becoming a courtroom sketch artist , covering the well-known Ruby Ridge and Waco trials. In this capacity he has worked for ABC, CNN, and PBS television news and the Spokesman-Review newspaper. At the end of the Ruby Ridge trial he completed a large portrait of Gerry Spence that hangs in his personal collection in Jackson Hole, Wyoming. John’s experiences at these trials led to his social realism show: Operation HUM/CON.

In the past ten years John has continued to paint landscapes and cityscapes concentrating on the area around Bisbee, Arizona and the Netherlands. John resides in Spokane, Washington. 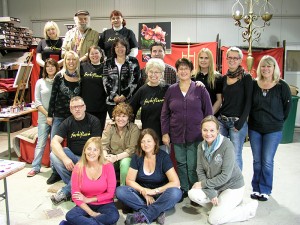 From the 16th to the 20th September, 2013 the seventh 5 day European Jenkins Certified Art Teacher (J-CAT GOLD) course of Gary and Kathwren Jenkins in the Orangery of the Estate Burig near Berlin, Germany, was deemed very successful by its participants.

All participants who successfully completed all three weeks of the teacher training programm, were awarded with an official J-CAT certificate. This allows the artist to use the Jenkins name when advertising their own classes that teach the Jenkins style of floral painting. They now also have their name and contact information added to the list of Certified Art Teachers on the Farbi Flora website. 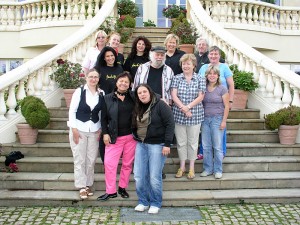 The sixths 5 day European Jenkins Certified Art Teacher (J-CAT GOLD) course of Gary and Kathwren Jenkins from the 09th to the 13th September, 2013 in the Orangery of the Estate Burig near Berlin, Germany, was deemed very successful by its participants.

All participants who successfully completed all three weeks of the teacher training programm, were awarded with an official J-CAT certificate. This allows the artist to use the Jenkins name when advertising their own classes that teach the Jenkins style of floral painting. They now also have their name and contact information added to the list of Certified Art Teachers on the Farbi Flora website.